We will walk through how to create a CI/CD pipeline in AWS. Basically, CI/CD stands for Continuous Integration/Continuous Delivery which means whenever we push a new code change our pipeline will build the project, run the tests and deploy the new changes. In this tutorial we will use 4 AWS components;

Here is the architecture we will build 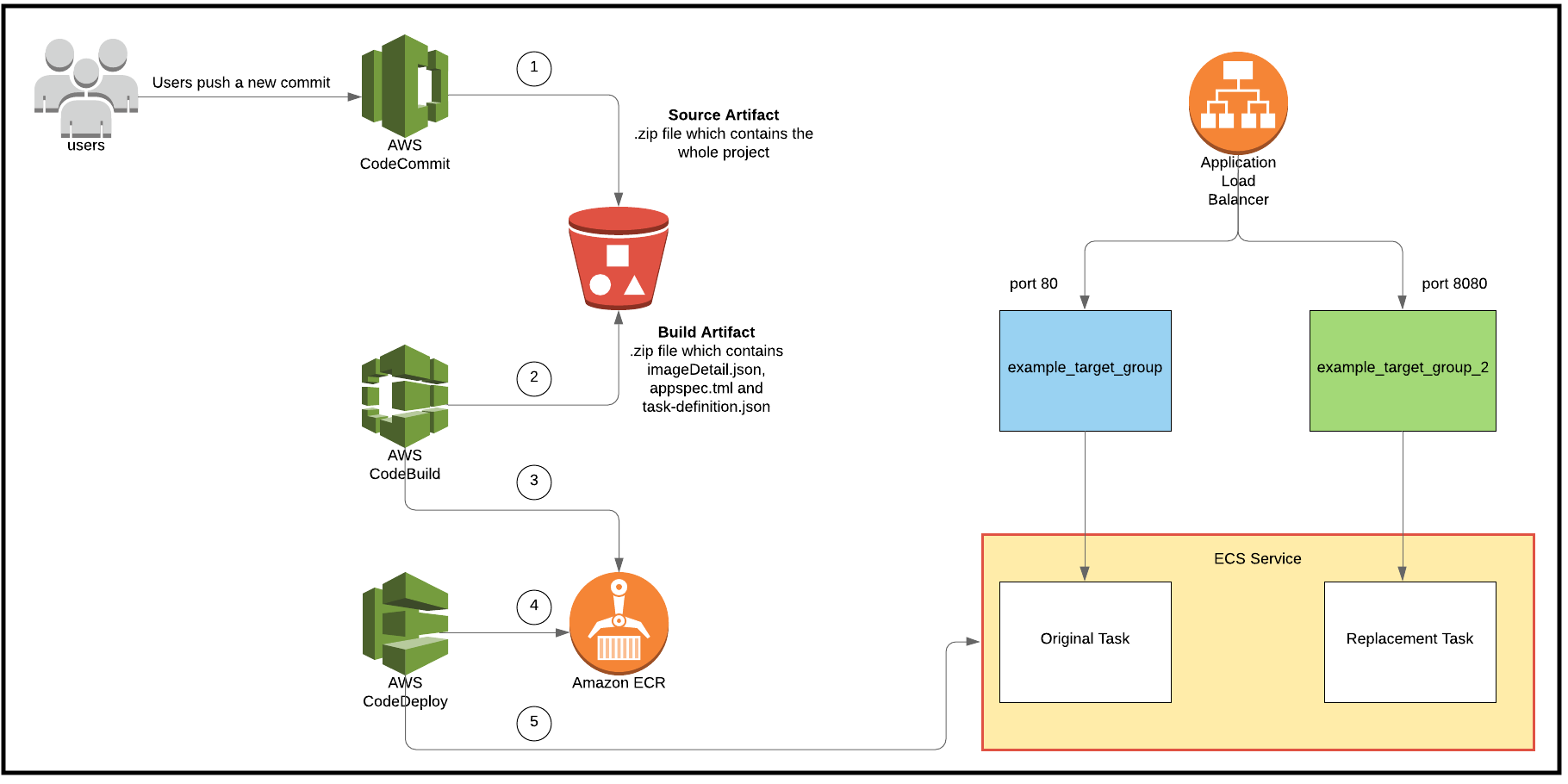 You might need to configure your aws credentials for CodeCommit if you haven't worked on CodeCommit before. So, I will skip this part and assume you already configured. Otherwise, you can follow the steps from AWS Guide.

After creating the repository we will now clone it to our local;

Now it is time to initialize our nodejs project and push the initial commit.

We will create a Docker registry in ECR which will keep the list of Docker images.

After creating our ECR repository we will push our first image.

AWS CodeBuild is the continuous integration service to build, run tests and produce our software artifacts. Our CodeBuild project will build the new commit we pushed and publish a new Docker image into our ECR repository. We will first create a CodeBuild project with a json file as an input. Then we will move to build our project.

Just in case here is the CodeBuildPullECRImagesRole with its two attached policies.

You can check AWS documentation for a more detailed codebuild configuration.

After creating our build project in CodeBuild we will create a file called buildspec.yml to describe phases and commands to run for each phase during the build. This is the place we will login into ECR repository, build and tag our Docker image from Dockerfile, and push the new image into our ECR repository. One important point to note here is including the necessary files into Output Artifact which will be used by CodeDeploy application later. We will include 3 files;

We saw how to spin up an ECS Cluster to deploy Docker containers on EC2 instances by creating Elastic Load Balancer with Target Group and ECS Cluster with ECS Service on my previous post. We will follow the same steps except there are a couple of small changes we need to make on our task definition. First, we won't define any hostPort in portMappings section to enable dynamic port mapping. Dynamic port mapping for Amazon ECS makes it easier to run multiple tasks on the same ECS service. In this case, multiple tasks refers to Original task and Replacement task generated for Blue/Green deployment. So, whenever there is a new ECR image created, a new task will be created to run along with previous task on same ECS service where it has one EC2 instance. Otherwise, we will have port conflict issue during the deployment.

Now, this was the json we used to register our Task Definition.

We can then push new task-definition.json change into our code repository. Before creating ECS Service we should have an Application Load Balancer with two Target Groups to listen on ports 80 and 8080. I skipped this part because my previous blog explains how to create an ELB with target groups.

When creating ECS service we will have deployment-controller set to CODE_DEPLOY and we will use one Target Group because multiple Target Groups are not supported for CODE_DEPLOY type services.

CodeDeploy is a deployment service to configure and automate deployments on given targets like EC2 instances, AWS Lambda functions or ECS services. In this use case we will of course use ECS type deployments. This is the place we will point the two Target Group we created. One for production port and other one for test port.

Now we will create a deployment group for our deployment application;

As the final step we will create and configure CodePipeline by combining the components we talked about earlier. Our pipeline will have 3 stages;

After creating the codepipeline we can release a new change to verify that everything works as expected. 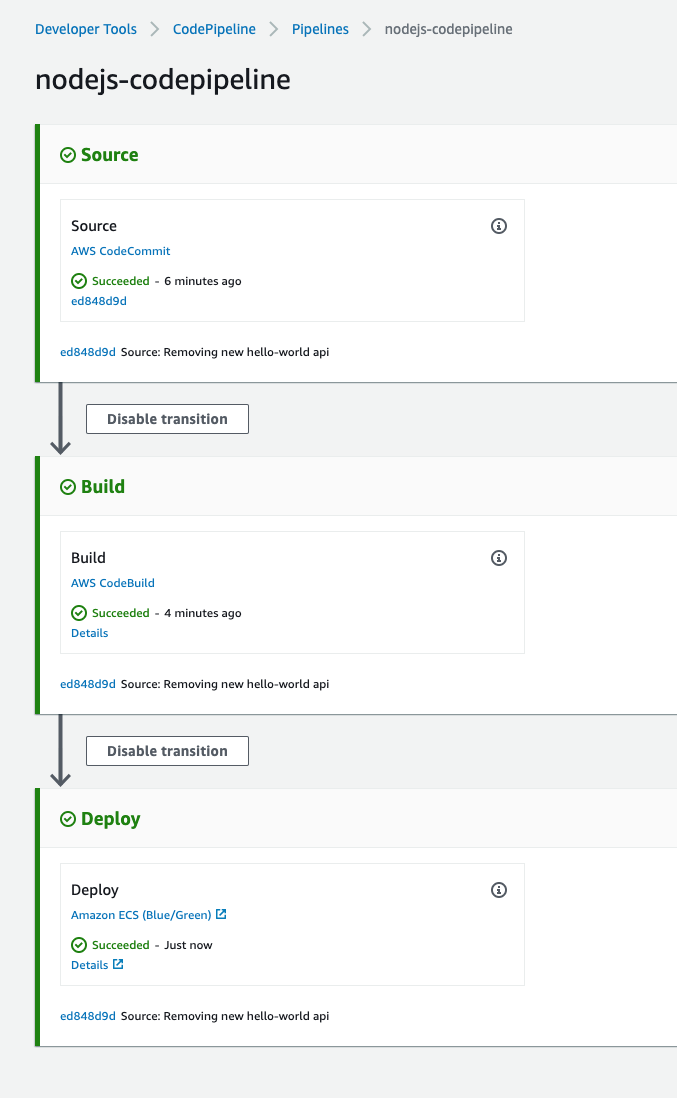 Now we only have one api which is the hello-world endpoint. We will add another api v2/hello-world and verify that during the deployment port 8080 will point to the new revision where port 80 points the current revision. After pushing the new change our Deployment with test traffic enabled will look like;

Here we can see two target groups attached to the ALB as well. One points to port 80 and other one points to 8080

On the other hand, if we send the same request to the production port (80 in this case) then server will return 404 error becauase production target group still points to the old revision.

After waiting 15 minutes target group with production will also point to the new revision and we will have 30 minutes to test production. If something goes wrong we will be able to rollback. Here is the deployment looks like after routing production traffic into new revision;

If we check ALB we will see that now there is only one Target Group pointing both test and prod ports.

Everything works as expected. After 30 minutes the old Task will be terminated on ECS cluster and new Task will be the permanent one. In this tutorial, we saw how to build a CI/CD pipeline with Blue/Green deployment type on ECS cluster. Feel free to ask any questions if you have. Additionally, you can find the resources from my github